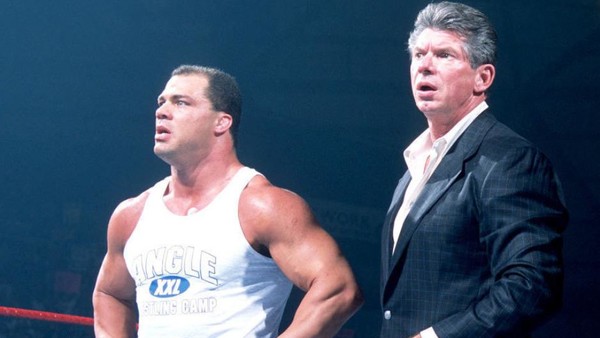 While some promotions have approached Kurt Angle about an in-ring return, the WWE Hall of Famer’s active days are behind him. While Angle himself has revealed he wished his final match went a little differently, he does have many moments he looks back on fondly.

Speaking on The Kurt Angle Show, Angle revealed he was part of the creative team during his main event run in the early 2000s.

“Actually they made me part of creative. I’ve got that top spot, creative started calling me every week bouncing ideas off of me,” Angle said. “Vince would even call me at times. I had Vince’s ear and he had mine. When you’re in the top spot like that, Vince wants to make sure that everything’s going perfectly. He wants to fill the talent in on what they need to do and how they’re going to about the next storyline or whatever it is. He’ll throw ideas at you, and you can say yes or no. For the most part, they’ll go with whatever you decide. For me, I was good with anything. I’d just say yes whenever creative would throw an idea at me.”

Angle went on to say many were in his ear with ideas, but he worked closest with former WWE writer Brian Gewirtz.

“Brian [Gewirtz], Bruce [Prichard], Vince. All of them, even JR,” JR wasn’t part of creative, but at times he’d call me and give me some advice. For the most part, it was Brian Gewirtz throwing ideas back at me.”

Angle still had a close relationship with Vince, as he emphasized that the WWE Chairman likes to have a personal connection with his main event talent. The two were so close that Vince would call Angle deep into the night, before he got started on his nocturnal gym sessions.

“Sometimes at 1:00 in the morning, 1:30 in the morning Vince would call me and ask me if I’m okay, what I thought about the show that night,” Angle said. “Vince, when he gets done with the show, he wraps up the show, he gets in his limo, he goes to the hotel, and then they rent out a gym in that city and Vince works out from 2:00 to 4:00 in the morning. Then he goes back to the hotel, goes to sleep from 4:30 to 6:00, and then he wakes up again. He takes an hour and a half nap and that’s it. He’s a monster. He does that everyday.”

If you use any quotes from this article, please credit The Kurt Angle Show with an h/t to Wrestling Inc. for the transcription.