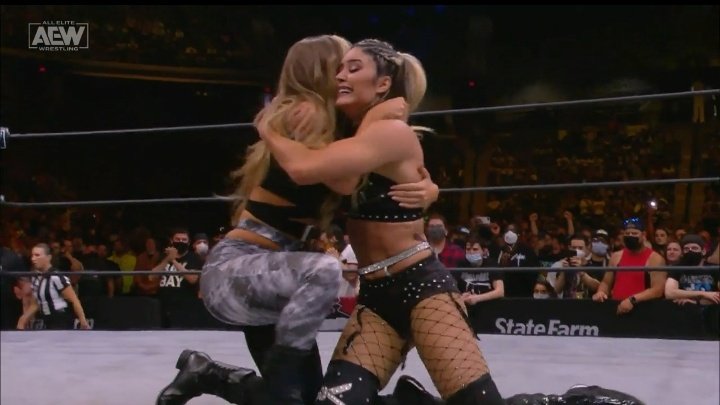 Anna Jay is back on AEW television.

Tonight’s AEW Dynamite saw Tay Conti pick up a victory over Penelope Ford. After the bell, Ford and The Bunny beat down Conti, leading to Anna Jay running down to make the save. Ford and The Bunny fled the ring before Jay could get any shots in.

Jay helped Conti to her feet as the two embraced to close the segment. Commentary announced Jay would be competing in this Sunday’s Casino Battle Royale at AEW All Out.

The is Jay’s first appearance on AEW programming since February, when she was sidelined with a shoulder injury. Jay underwent surgery for the injury and was estimated to be out of action for “6-12 months.” Despite potentially being out of action for a year, Jay’s scheduled return to the ring this Sunday marks a recovery period of just over the minimum expected timetable.

Before she was injured, Jay tagged with Conti on numerous occasions. The two were collectively known as “TayJay” by the fans. Jay and Conti competed in the AEW Women’s Tag Team Cup Tournament: The Deadly Draw last summer, advancing to the semifinals.

You can see highlights from Jay’s return below:

.@annajay___ is BACK and comes to the aid of her BFF @TayConti_.@TonyKhan has just added Anna Jay to this Sunday's Casino Battle Royale at #AEWAllOut – tune in to @tntdrama NOW to watch #AEWDynamite! pic.twitter.com/bDx8pFB6F5