Jeff Jarrett On How Special The WWE Intercontinental Title Was To Him, Working With Chyna 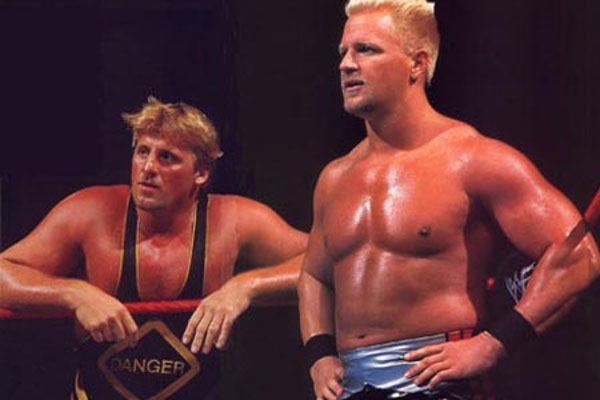 Jeff Jarrett and Owen Hart were close friends before they began tagging together in the WWF. When the time came to unite the travel partners on screen, their chemistry was automatic.

Jarrett and Hart won the WWF Tag Team Titles together shortly after joining forces, successfully defending the straps at WWF WrestleMania XV. Less than two months after their WrestleMania defense, Owen Hart would pass away in a tragic accident at WWF Over the Edge 1999.

Eight days after his friend passed, Jarrett won the Intercontinental Championship. Speaking to Love Wrestling, Jarrett emphasized how much that specific title victory meant to him.

“You can’t really put it into words. At that stage in my career in ’99, I’d been wrestling 13, 14 years and won the regional titles, and [I’d] go to Japan, or Puerto Rico or Texas, and then obviously, the first time I won it against Razor [Ramon],” Jarrett said. “I didn’t really process at the time, but I know the overwhelming of emotion because [of] what was going on prior to that. Me and Owen had been teaming, and he was doing the Blue Blazer. I’ll just say that the Intercontinental Title wasn’t in the cards, or wasn’t in the plans. So when that opportunity hit, it was overwhelming and it played out right on [for] the whole world to see.”

Double J doubled down on his love for the mid-card championship, saying its lineage makes it among the most valued titles in pro wrestling history.

“To me, it’s still, in a lot of ways, the second most prestigious belt in the world. And yes, there’s a RAW belt and a SmackDown belt, and no disrespect any of that,” Jarrett said. “But the Intercontinental Title for me, and this is for me, has such a special lineage from I mean, we can go on and on, but Curt Henning and Roddy Piper and Bret [Hart] and Shawn [Michaels] and Razor [Ramon] and just, you know, Stone Cold, and Rock and just how it was through the years. And then in later years, The Miz I think gave it a lot of respect. It’s a special title in the annals of professional wrestling. But, for me to win it under those circumstances. I can’t really put it into words how special it was.”

The following year, Jarrett would resume his Intercontinental Title pursuits, this time against WWE Hall of Famer Chyna. Jarrett emphasized how much he valued his relationship with Chyna, noting the pair shared many of their careers’ biggest moments together.

“I don’t believe in coincidences. I just don’t. I believe in convergences. I don’t think anything really happens by accident, and when I sit here today, obviously years removed from the situation that when I left the WWF at the time, I had my last match with Chyna,” Jarrett said. “Then, fast forward, Chyna’s last match was against me in a TNA ring. That didn’t happen by accident, and for whatever reason, and I don’t know, but God rest her soul. She really battled her demons.”

Jarrett and Chyna squared off in a Good Housekeeping match, the first of its kind, which laid out various kitchen items around the ring for the competitors to use as weapons. Chyna’s victory earned her the Intercontinental Title, making her the first and only woman to capture that title.

“The fond memories that I had, that Good Housekeeping [match]. That night there was obviously, I’ve gone into a lot of drama about the pay and that whole we’ll say out-of-the-ring situation. But, as far as the creative, and the in-ring, and the match that was laid out, and Pat Patterson, and just the different finishes, and how Pat came up with that creative swerve. I knew in my mind before I got to the building sort of a match that I wanted to layout and building up to that.

“The entire story, as you know, sort of goes back several weeks, if not months. Quite a bit because DX, Stone Cold in so many ways identified the Attitude Era, and so did Mick Foley and Hell in a Cell and all that. But, when you look at DX at the real height of the Attitude Era, you know, the New Age Outlaws and Road Dogg and his catchphrases and just the emotion that evokes. But, also a part of that was, to me, just right up there at the top of it all [was] a female for the first time, and her look, and her charisma. That’s Chyna.

“I mean, she identified the Attitude Era in so many ways, and the storyline [of] me beating up women, and Cindy Margolis, and [Fabulous] Moolah, and just the whole build-up to that, and the mud match and all those kinds of things. It really was a fantastic creative story. I’ve nothing but fond memories of all that, but man, what a tragedy. The documentary was heart-wrenching in a lot of ways. A lot of people say, ‘Oh, my God, why’d they document that,’ but if they can help one person, and it can help I can assure you, I feel like it will help a lot of people. Seeing Chyna, the megastar on TV, but realizing in everyday life, she, in a lot of ways, was literally living in hell on earth. That’s tragic in so many ways.”