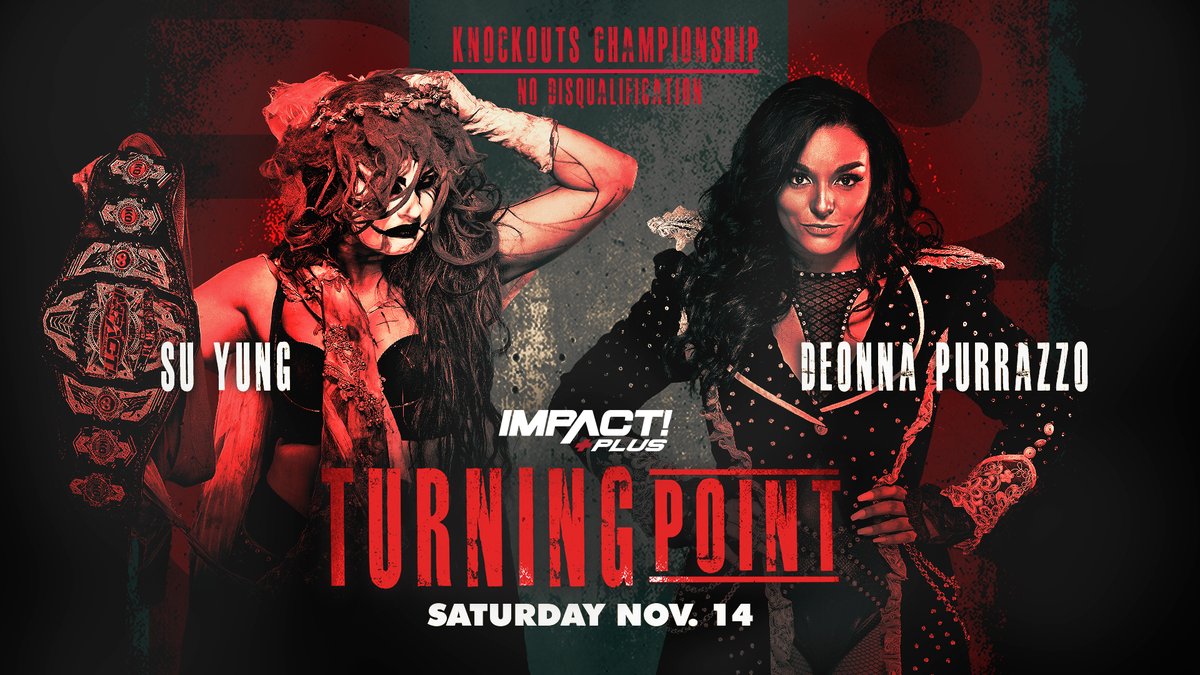 After a no disqualification ending to their Bound For Glory rematch this week on Impact, Deonna Purrazzo will earn another opportunity to face Su Yung in a No Disqualification Match for the Knockouts Championship at Turning Point on Saturday, November 14th. This will be the second time Yung defends her title against "The Virtuosa."

As mentioned before, their scheduled match ended in a No DQ after Kimber Lee slid a chair in to help Purrazzo gain the upper hand in her match. Yung and Purrazzo tugged the chair back and forth until Yung accidentally shoved it towards Purrazzo's midsection, causing their match to end so abruptly.

Purrazzo, the former Knockouts Champion, lost her prized possession following her Open Challenge Match at Bound For Glory, where Yung answered the call. Purrazzo held the title for nearly 98 days before losing it to "The Undead Bride."

Not only did Yung become the new champion, but both The North (Ethan Page & Josh Alexander) and Rich Swann also came out new victors. They will each defend their titles.

The North will put their titles on the line against The Good Brothers (Doc Gallows & Karl Anderson), who they squared up against in a Four-Way tag match just two weeks ago where they won their titles. Swann, on the other hand, will defend his title against longtime arch-rival, Sami Callihan. These two have seen their fair share of bouts that stem all the way back to December of 2018.

In addition to those three big title matches, Brian Myers will square off with Swoggle in a singles match. This week, Swoggle was rudely interrupted by Myers during his interview. Myers called Swoggle a "sideshow attraction freak" and proceeded to push him. Swoggle made his return back to Impact during the "Call Your Shot" Gauntlet.

Lastly, Moose will go one-on-one with the former X-Division Champion, Willie Mack. Their rivalry began after Moose viciously attacked Mack while he was interacting with a fan. This will be Moose's first match back since his victorious and life-altering match against EC3 from Bound For Glory.

Below is the updated card for Turning Point:

Turning Point will broadcast exclusively on IMPACT Plus. Those who sign up now will recieve a free 30-day trial.

BREAKING: @realsuyung will defend the Knockouts Championship against @DeonnaPurrazzo in a NO DQ match on November 14th at #TurningPoint, exclusively on @IMPACTPlusApp!

BREAKING: After victory in our tag team main event, @TheSamiCallihan will challenge @GottaGetSwann for the IMPACT World Championship on November 14th at #TurningPoint, exclusively on @IMPACTPlusApp!

Previous Article
The New Day Recall How WWE Announcer Was Included In Original Plans For The Stable
Next Article
Chavo Guerrero Jr. Recalls His Final Messages With Chris Benoit