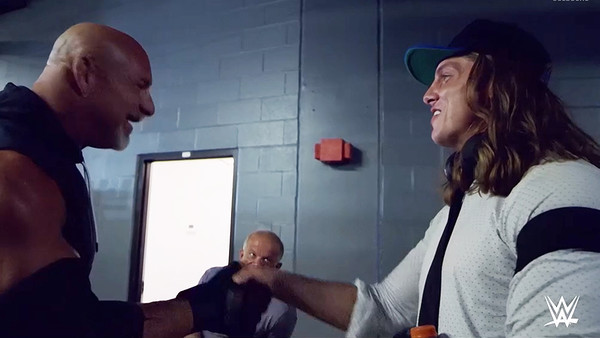 Despite never interacting on television, Riddle has a storied history with WWE Hall of Famer Goldberg.

The former United States Champion has criticized Goldberg on multiple occasions, bashing his limited move-set. The two briefly crossed paths backstage at SummerSlam 2019, which only fanned the flames of the off-screen rivalry.

“I’ll say this. I had my interaction with Goldberg, bumped into each other, he’s not my bro, I get it, you’re not my bro,” Riddle told Sony Sports India (h/t to Sportskeeda for the transcription). “I kept calling him bro and he didn’t like that whatever, you know me, I’m not the best listener.”

The cameras didn’t catch Riddle’s second conversation with Goldberg, which went down after the Hall of Famer’s bout with Dolph Ziggler.

Regardless of his gripes with Goldberg, Riddle admitted that he is “extremely entertaining.” With the two both regulars on Monday Night RAW at the moment, Riddle revealed they recently interacted once again.

“I saw Bill the other day before he challenged Bobby Lashley and he was walking to the Gorilla Position and I was standing there,” Riddle detailed. “I was with Damian Priest at the time and he says hi to everybody and then Goldberg comes up to me gives me a look. He was making a face and then he goes, ‘Hey, congratulations kid.’ And I was like, ‘Oh man, Goldberg is kind of nice.’

“So I gave him a little handshake and he went out and challenged Bobby and then he was coming out, through Gorilla again and I was like, ‘Hey Goldberg, good stuff,’ and as he gave me a fist bump he says, ‘I only need two moves.’ I was like, ‘Oh man, the guy’s still got it.'”

Goldberg is set to challenge Bobby Lashley for the WWE Championship on Saturday, August 21, at WWE SummerSlam.